Revealed: The best new homes that have been built by you

The winner of the best self-built home under £150,000, made from shipping containers, by Patrick Bradley in Northern Ireland 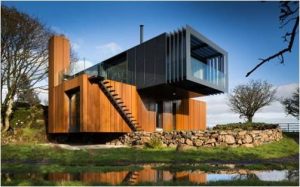 When Catherine and Adas Nicholson bought a bungalow in Shoreham-by-Sea, West Sussex, they were bewitched by the view out to the English Channel. “It was so amazing, I felt we should do something to make the most of it,” she says.

A decade later, their plan to “do up” their modest house has turned into the creation of a striking seafront family home, which has been named the overall winner of The Daily Telegraph Homebuilding and Renovating Awards this year.

They celebrate the most tasteful, imaginative, forward-thinking and beautiful self-built designs in the UK.

Many of the winners of the different categories have in common this desire to make the most of what they love, be it a tricky plot in a great location, the challenge of making a modern home out of listed buildings, or giving a new lease of life to old cottages.

For the Nicholsons, it was making the most of that view.

After living in it for five years, they thought they knew what they wanted to build. But that design changed over time: at first it was painting a few walls and replacing the windows, then the idea was to build into the loft, or to add a second floor. And then it morphed into something more.

“We had an open mind,” says Catherine, a first-time self-builder. “And we knew it had to be special.”

The bedrooms are downstairs with the living area on top, making the most of the views. For Catherine, the view is still the best thing about the house. “It’s a cliché,” she says. “But it’s the backdrop to our family life.”

They tried to reference the vernacular of the area. “We wanted it to be of its location, so we looked at traditional methods of construction in Sussex, such as capped flint walls – then we discovered how much it cost.”

Instead, they went far more local, taking architectural cues from the beach on which the house sits. 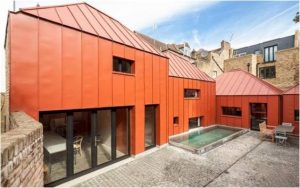 The winner of the most innovative home by Henning Stummel in London CREDIT: SIMON MAXWELL

The house appears to blend into its surroundings. Its glass wall, which looks out over that view, reflects the sea; outside it is clad in pebbles and timber, evoking driftwood.

Huge sliding doors mean that the large open-plan living area feels part of the seashore, and the living and dining areas have uninterrupted views of the sea. Looking at the house from the water’s edge, it appears to sit on the beach.

Ideas for the materials and the design came from the Nicholsons’ architect, Giles Ings, of ABIR. Catherine says that the right chemistry with an architect is important. “A lot of it is down to instinct. We felt we could have a good communication with them, and we felt they were listening to us.”

The Nicholsons decided to knock the whole thing down and start again to build themselves a better home, rather than adding to their original bungalow. “It is possibly a better-value option to rebuild – you spend more overall, but you get a really optimised building in the end.”

They largely stuck to their budget by hiring a quantity surveyor and keeping a close eye on the bills during the 10-month build. Now, they have created their “forever home”, and she has no passion to do it all again.

Catherine’s advice: “If you have lived there and know what you want – keep hold of that through the build.” One example was the glazing, which was one of the largest expenses but is now the centrepiece of the house. 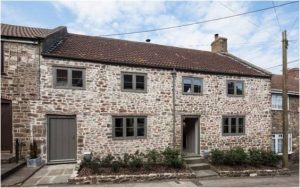 The winner of the best renovation, by Lydia Robinson and Lawrence Grigg in Somerset CREDIT: SIMON MAXWELL

This is a theme among the winners of these awards: building on profits.

A property in Bristol by Chris Birakos and Kirstie Potter, which has won the award for most inspiring home, is one such build. The first-time self-builders, both in their mid-20s, built a home in an awkward city plot.After buying the plot for £87,000 and spending £300,000 on the house, it is now worth almost £700,000. 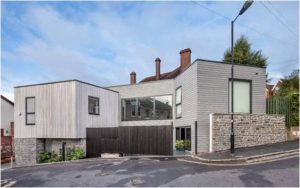 A property in Bristol by Chris Birakos and Kirstie Potter, which has won the award for most inspiring home, built on an awkward city plot CREDIT: SIMON MAXWELL

Self-building doesn’t have to be high cost, as the winner of the best build under £150,000 demonstrates.Architect Patrick Bradley’s home in Northern Ireland is a striking building. It is constructed using four cantilevered, 45ft-long shipping containers, the bottom half of which is clad in orange Cor-Ten steel.

Bradley’s home was actually £5,000 under this budget, and took only five months to build – all the while being followed by a camera crew from Grand Designs.

Not only was it cheap to build, but it costs just a maximum of £8 per week to run.

The house sits in Drumlamph Wood, Co. Londonderry. Bradley says he “wanted 360-degree views and to feel elevated above the treetops”. Part of the savings were made using the containers, which cut down on materials and labour time. He also hired a quantity surveyor to see if costs could be squeezed.

Like the Nicholsons’ home, this house has been clad in materials of the area: metal mesh from local farms and Cor-Ten steel, which blends into the nearby rock. The open-plan living area, framed around a wood-burning stove, is on the top floor, with floor-to-ceiling windows for the view, and downstairs are three bedrooms. 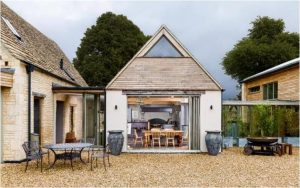 Winner of the best extension, by Mr and Mrs Cooper, HampshireCREDIT: MARTIN GARDNER

“The contractors I used were more commercial based but were keen to work on this project as it was so different,” says Bradley. “Everyone else thought my idea was crazy, but the team I had around me were innovative and happy to experiment, and pushed the boundaries.”

The awards do not just reward the most extreme designs. The winner of the best conversion award, Anne Kirmond, connected a cluster of listed barns and stables in Gloucestershire using a modern, glazed tunnel.

Materials were stripped back, the oak roof frame was revealed and natural stone walls were left uncovered. The new design helped enhance the old buildings.

Self-building is a challenge for many reasons, be it finding financing, negotiating the thorny planning system, or having the time or willpower to direct such a major project. But these awards prove that it can be done – and with astounding results to end up with the ultimate home.

Origin, the sponsor of The Daily Telegraph Homebuilding and Renovating Awards, is the leading British manufacturer of bespoke aluminium bifolding and residential doors, premium-quality windows and made-to-measure blinds, with more than 15 years’ experience in the industry (origin-global.com; 0808 168 5816)

Homebuilding & Renovating is the UK’s bestselling magazine for people building or renovating their own home. For 26 years it has been offering practical advice as well as showcasing the best examples of new homes from across the country. Telegraph readers can sample the magazine at a discounted price of £3 for three issues (homebuilding.co.uk/awards-telegraph)

Request a call back